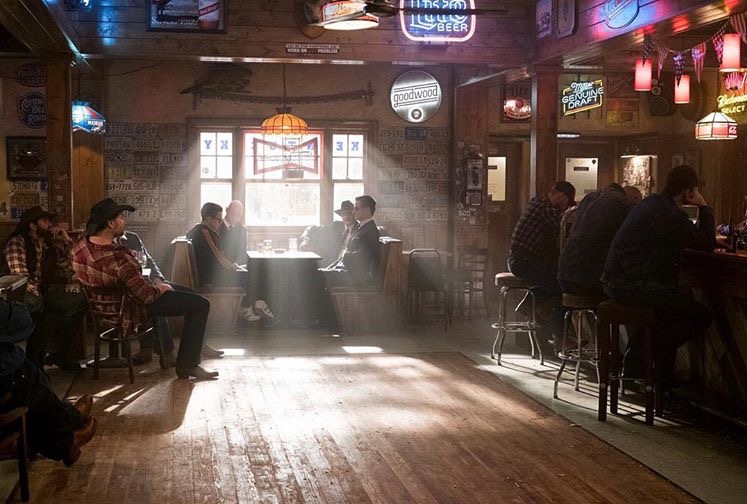 This Friday, Kingsman: The Golden Circle will hit theaters around the world, and the film has some great connections to Louisville. Brown-Forman distilled the spirit, The Statesman, for the upcoming film and, due to some serendipitous circumstances, Goodwood Brewing is also featured in the feature film.

Dominic J. Sikking, Set Designer and Producer for the major motion picture, stopped by the Goodwood Taproom a year and half ago. He loved the Goodwood Brewing Co. brand, the beers and the vibe of the taproom. Sikking soon got in contact with Goodwood Brewing's CEO, Ted Mitzlaff, and asked if they would be interested in having Goodwood represented in a bar in the sequel to The Kingsman. Mitzlaff laughed and asked how much that would cost. Sikking was such a fan of his Goodwood brewery experience, he said he'd love to feature them free of charge and asked Goodwood to simply send signage and other swag to their set in England. Mitzlaff signed the pertinent contracts and shipped the requested items. Mitzlaff was invited to be a stand-in for the bar scenes, but was involved in a new market launch at the time so he was not able to participate.

"We are extremely honored to have been asked by the Kingsman producer and set designer to participate in their latest movie, The Golden Circle. We are extremely proud of our products and brand, and it is gratifying to have been acknowledged by their team and included in their film. We are equally excited to be included in a film that boasts the new Statesman bourbon by Brown-Forman. A fun double-win for Goodwood" said CEO, Ted Mitzlaff.
‍

The movie surrounds The Kingsman, an international intelligence service has had their headquarters destroyed, the members of Kingsman find new allies in an organization posing as a Bourbon distillery in Louisville, KY - named Statesman. The Statesman uses Bourbon as a front to their operation, furthering the ties to Louisville culture! The two agencies band together to fight a common enemy.
‍